+E3.cable is a superset of E3.schematic and is used for designing and documenting cable plans and harness layouts. Individual conductors are combined together in the design to form new cables or harnesses. Shielding and twisted-pair structure can also be added to the cables and automatically shown in the schematic.

” We have a very sophisticated and all-encompassing system with an advanced control system.

With E3.series I am in control of this complexity and it has allowed me to create designs logically. It is the ultimate way to take what I have in my head and put it on paper. 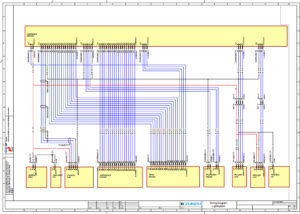 Views allow alternate documentation of devices such as single-line diagrams, wiring diagram and cable plans. For example connectors can be represented as single pins in the schematic and then as the complete connector in the cable plan. Changes to any of the views, immediately updates all other views, ensuring all documentation is synchronized.

Blocks can be integrated with PCB design data created internally or by the supply chain. Externally facing connector and signal information from the PCB system is dynamically added to the blocks in E3.series, changes to the PCB are re-imported into the block and all information is updated. E3.cable supports most PCB formats and has bi-directional integrations with Zuken’s CR-5000 and CR-8000.

Blocks can represent Hierarchical systems and sub-systems, users can tunnel down into blocks to the level below and signals and connections can pass between levels and sub-levels. Hierarchy enables top-down and bottom-up design, promotes design reuse and provides managers with a system level overview.

PCB design data can be imported directly in E3.cable, where a function block is generated, the interface connectors are placed and the signal definition and additional attributes are imported. Using this functionality the data flow between PCB design and system design is done with just a few clicks.

This saves a lot of time-consuming work and prevents mistakes while manually inputting. The data is transferred via an E3.series standard format, a very simple CSV file or using specific E³.series interfaces.